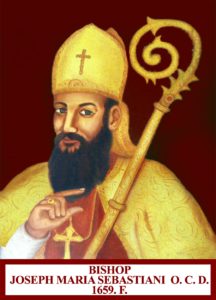 1. Bishop Joseph of S. Maria de Sebastiani, OCD., consecrated on December 15, 1659 Bishop of Hieropolis in Isauria took charge as first Vic. Ap. of Malabar in May 1661; but was obliged to leave India on the Dutch conquest of Cochin in 1663.

2. Bishop Alexander de Campo consecrated on January 31, 1663 at Kaduthuruthi by Msgr. Joseph Sebastiani, with the title of Bishop Megara in Achala. He was a native priest of Kuravilangad, his real name being Parambil Chandy; died about 1678. 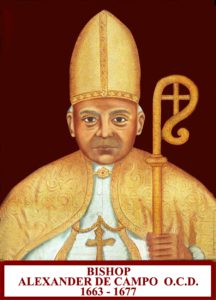 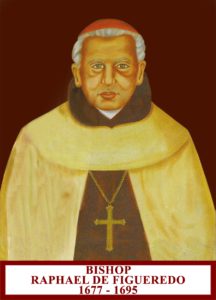 3. Bishop Raphael de Figueredo, Salgrado, elected Bishop of Adsrumetum in Africa and Co-Adjutor to the Bishop A. de Campo, was consecrated in 1677, and died on October 12, 1695 and was buried in Thekkanpallipuram. 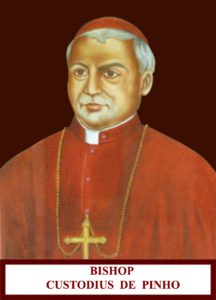 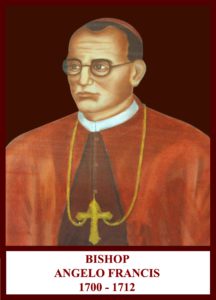 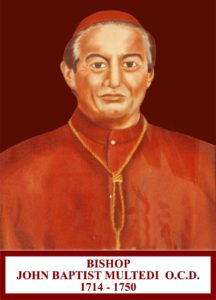 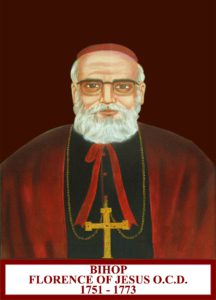 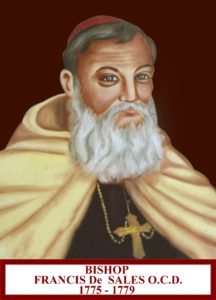 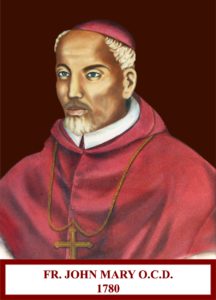 9. Fr. John Mary of St. Thomas O.C.D., who was nominated Vicar Ap. of Verapoly in 1780, died at Madras before his consecration. 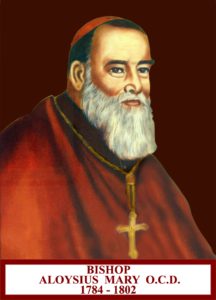 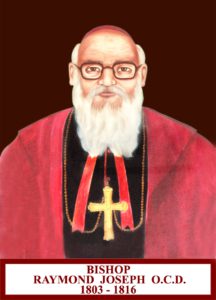 12. Bishop Miles Pendargast, O.C.D. who was consecrated in Rome as Vicar Apostolic of Verapoly in 1819, resigned in 1828. 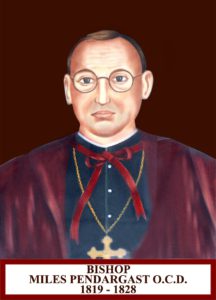 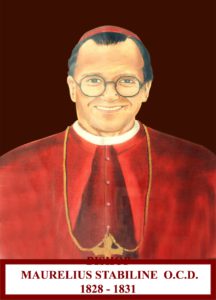 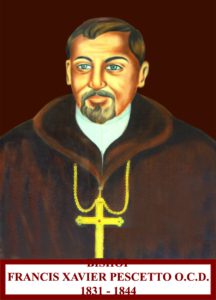 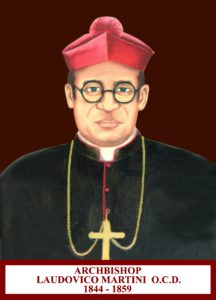 16. The Most Rev. Bernardine Baccenelli of St. Teresa, O.C.D., Archbishop of Pharsalia in Thessaly and Vic. Ap. of Verapoly, was consecrated in 1847 as Co-adjutor, and succeeded as Administrator Apostolic in 1853 and Vicar Apostolic of Verapoly in 1859, died at Verapoly on September 5, 1868. 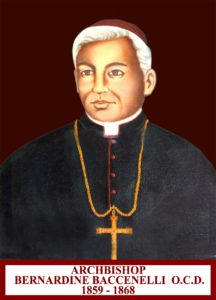 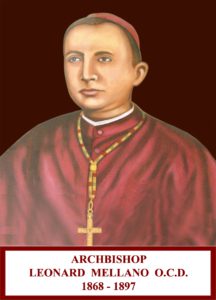 1. Most Rev. Dr. Leonard Mellano of St. Louis, O.C.D., Archbishop of Nicomedia and Vic. Ap. of Verapoly was consecrated on November 15, 1868 at Verapoly. He became Metropolitan of the Archdiocese of Verapoly, on September 1, 1886, and died on August 19, 1897 at Verapoly.

Most Rev. Marcelinus Santa Thresia OCD, Co-adjutor Bishop of Verapoly from 1877 to 1892. He was the Rector of Puthenpally Seminary from 1866 to 1877. He was entrusted with the care of Syro-Chaldaic Rite till 1877. 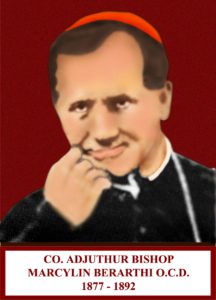 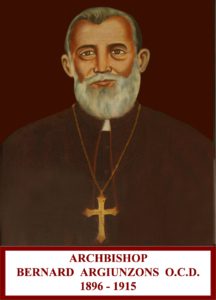 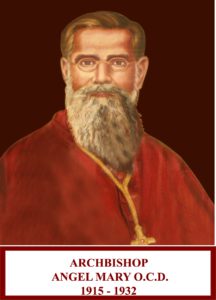 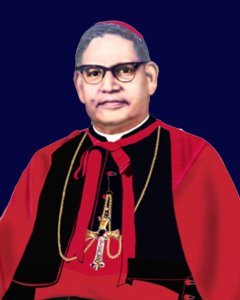 4. Servant of God Most Rev. Dr. Joseph Attipetty, Ph.D., S.T.D., LL.D., nominated Titular Archbishop of Gabulla and Co-adjutor to Archbishop Angel Mary on November 29, 1932, was consecrated in Rome by H.H. Pope Pius XI on June 11, 1933. Dr. Joseph Attipetty assumed the reigns of administration on December 21, 1934 after the resignation of Dr. Angel Mary. He is the first indigenous Archbishop of Verapoly Archdiocese. His Pallium Investiture took place on July 25, 1935. He expired on January 21, 1970.

The number of churches, monasteries, convents, seminaries, schools, colleges, technical institutions, printing presses, hospitals, homes for retired priests, home for the aged, social centres and various associations and institutes dedicated to intellectual and vocational apostolates that have come into being in this archdiocese during Archbishop Joseph Attipetty’s tenure of office is truly impressive.

Archbishop Joseph Attippetty was declared Servant of God on 21st January 2020. On the demise of the Most Rev. Dr. Joseph Attipetty, the Rt. Rev.  Msgr. Cornelius Elanjikal Ph.D., D.C.L., was elected Vicar Capitular on January 24, 1970. As he was nominated Bishop of Vijayapuram on February 15, 1971, Fr. Francis Payapilly was elected Vicar Capitular.

He not only followed the progressive policies of his illustrious predecessor but also opened new avenues of apostolate in keeping with the changing times. His Holiness Pope John Paul II during the Pastoral Visit to India, presided over a Eucharistic Celebration at H.M.T. Grounds, Kalamassery whereafter he paid a visit to St. Francis Assisi Cathedral Ernakulam and stayed at Verapoly Archbishops’ House on 8th and 9th of February 1986. 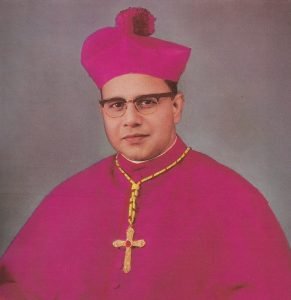 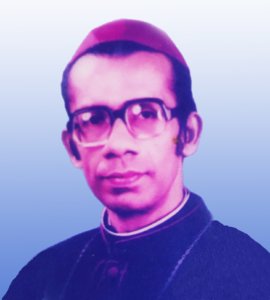 On the demise of the Most Rev.Dr.Joseph Kelanthara, Protonotary Apostolic Rt. Rev. Msgr. Emmanual Lopez was elected Archdiocesan Administrator on October 19, 1986.

His term of office as archbishop is marked by a steady development in all spheres of life and activities of the Archdiocese. 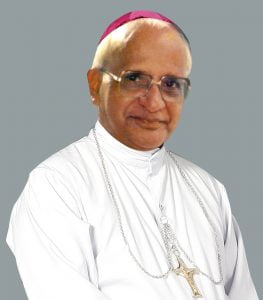 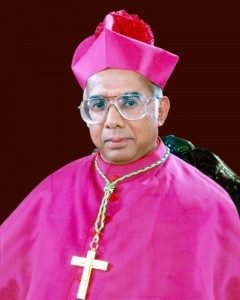 7. Most Rev. Dr. Daniel Acharuparambil O.C.D., M.A., Ph.D., was nominated Archbishop of Verapoly on August 5, 1996 and was consecrated on November 3, 1996 by His Eminence Jozef Cardinal Tomko, the Prefect, Congregation for the Evangelization of Peoples, Rome. The same day he received the pallium.  He died on October 26, 2009. 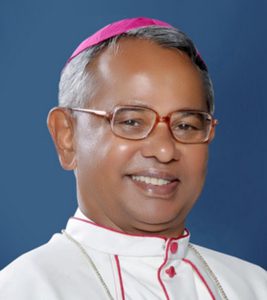 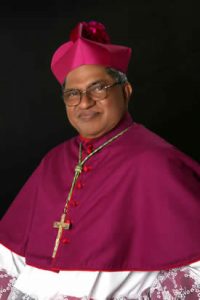 8. Most Rev.Dr. Francis Kallarakal, M.A., S.T.L., the Bishop of Kottapuram was nominated Archbishop of Verapoly on February 20, 2010 and was installed Metropolitan Archbishop of Verapoly with canonical solemnities and rituals officiated by His Eminence Telesphore Placidus Cardinal Toppo, Archbishop of Ranchi on Sunday April 11, 2010. He received Pallium on June 29, Tuesday 2010 at St. Peter’s Basilica, Rome.

It is Archbishop Francis Kallarakal who made the historical declaration erecting St. Philomina’s Church Koonammavu as St. Chavara Kuriakose Pilgrim Centre in the context of the canonization of the Blessed Chavara Kuriakose who was the Vicar General of this Archdiocese and who spent the last seven years (1864-1871) of his life at Koonammavu being the Prior of six Monasteries of Verapoly Vicariat.  The Archbishop was one of the principal concelebrants for the canonization ceremony held on 23rd November 2014 at Vatican, Rome.

The Archdiocesan Synod, celebrated from 8th to 12th April 2015, after 118 years, was a historical milestone in his tenure.

He served as the Bishop of Calicut for almost 9 years and was then appointed by Pope Benedict XVI as the Secretary of the Pontifical Council for the Pastoral Care of Migrants and Itinerants on February 22, 2011. On March 5, he was also appointed as a Member of the Congregation for the Evangelization of Peoples.

Dr. Joseph Kalathiparambil was appointed as the Archbishop of Verapoly by His Holiness Pope Francis on October 31, 2016. His formal installation as Archbishop of the Archdiocese of Verapoly took place on December 18, 2016. 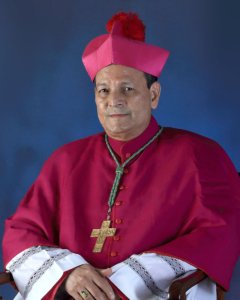